After several hikes with my friends and family, I wanted to go out there alone this time. Something I hadn’t done yet but I felt I needed to do. The spring holiday seemed to be a good time for hiking, and at that early spring UK was the most appealing option. I decided to give a try to the famous West Highland Way.

I ordered from online the Trailblazers West Highland Way guidebook, written by Charlie Loram. The book has good info about the flora and fauna etc. and the maps are good enough for this easy walk. But if you’re planning to do something outside the marked trail, then I would advice to buy a decent map.

HOW TO GET THERE

I took an evening flight from Helsinki to Amsterdam, where I stopped for the night and kept going in early morning. After landing to Glasgow one could buy camping gas from one of the TISO outdoor stores in the city centre. Then I just headed to the central station and took a train towards Milngavie.

Was quite exciting feeling to arrive to Milngavie railway station, the official starting point of the WHW. In the central street of this small village I saw the obelisk shaped stone, indicating the trailhead. Couldn’t have missed it, as there was some sort of buzz going on, as several other hikers were putting themselves ready for the trail. I did so too. Changed my clothes and refilled my water bottles in the nearby public toilet. The sun was shining bright as I took my first steps, though big cloud masses were gathering around quite quickly. After escaping the woodlands around the village some more open ground opened in front of me and I began to feel the beauty of this hike. Going was easy. 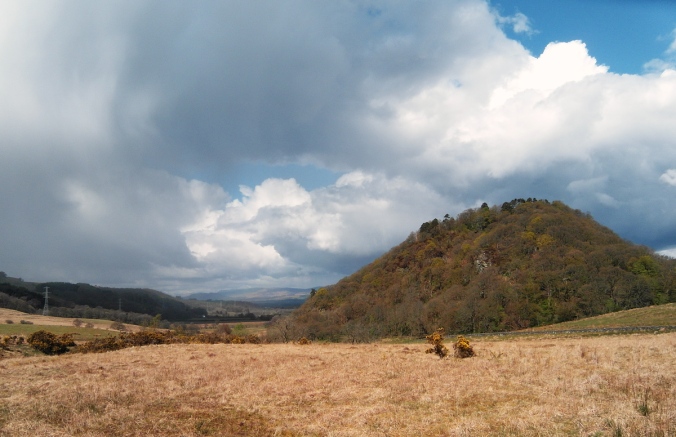 Last couple of hours it rained a lot and I had to use my rain poncho for the first time. I was happy how it performed. The campsite, Drymen farm, was quite full as there were at least 12 tents and people using the bunkhouses as well. At seven I was quite dead and tired and ready to experience the first night in my Vaude. Listening the rain battering the tent I felt asleep, after a successful first day. What a feeling to be hiking alone! 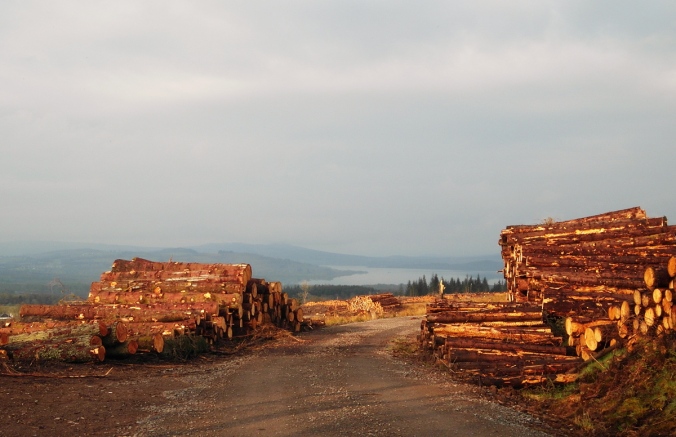 I got up early and well rested, eager to reach the Loch Lomond. Others were still sleeping as I took my first steps of the long day. Didn’t know yet where to camp the next night.

It didn’t rain yet but wasn’t far either. I reached the Conic Hill dry but heavy wind forced me down to the lake quite quickly. Was funny to think that it will take two days to reach the end of this long lake. In Rowardennan I stopped to have some fries in a bar. Timing was perfect as I saw United losing its 4-2 lead against Everton!

I made a plan to camp at the bothy couple of hours ahead. Following the lake wasn’t as flat as in the shores of Netherlands but small ups and downs constantly. In the end it became quite a long day and I was happy to reach the bothy just before it started to rain heavily. 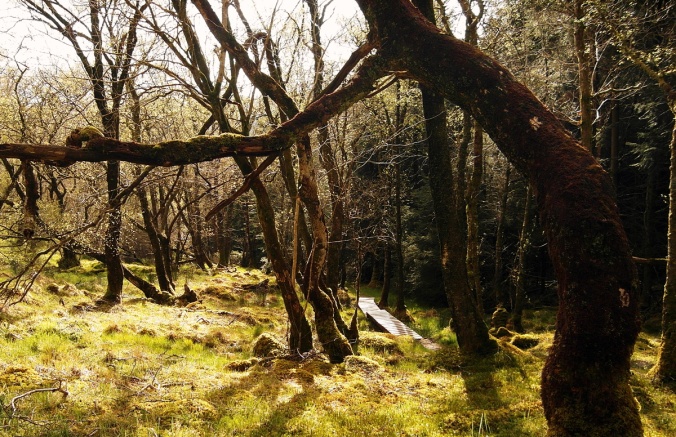 The sunny fairytale-looking forest transformed itself rapidly to a spooky environment. I was alone in this old stone shelter. I tried to make myself cozy but reading the guest book was a big mistake. Warnings of all kind of monsters, and pine marten being the worst beast. I tried so hard to think what the heck is pine marten in Finnish, but the animal remained mystery for me that night. I sealed my food as was advised, and laid down quite restlessly.

It was hard to fall asleep, and when I finally did, some rustle made me woke up. My heart pounding I put quickly my glasses on and lit up the headlamp. I was staring at the beast itself. Cat size, dark, eyes glimmering. We stared each other for a brief second before it sneaked out from some hole at the door. Shit I got scared. I spend some time just staring at the darkness before I jumped out from my Rab bag and saw and hack some wood to block the holes at the door. The food boxes had been moved. 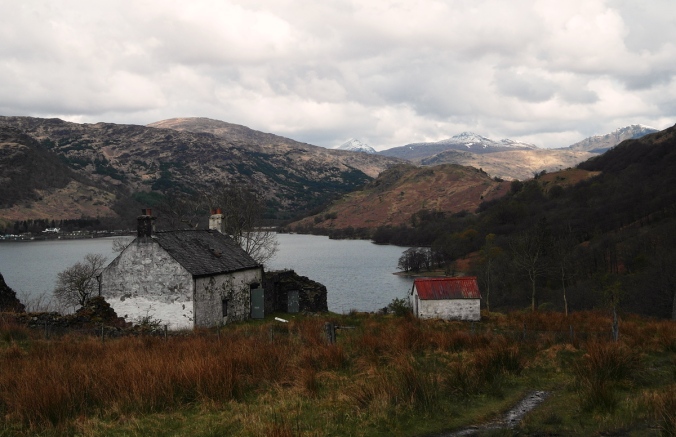 In the morning I greeted the daylight in joy. After the terrors of the night the new dawn felt good and I was eager to keep going. First I had to walk some 5 km to the Inversnaid Hotel, where rich people had for sure no idea how it is to share a room with food stealing pine marten! 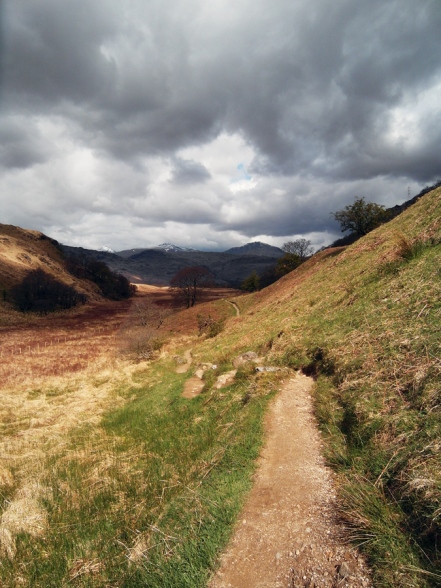 Before reaching the end of the lake I saw some deer and feral goats enjoying the partly sunny day. Walking felt good when I entered the real Highlands. I stopped at the famous Drover’s Inn to eat some Shepherd’s Pie before beginning the long stretch that would take me finally to the next campsite, over halfway of the WHW. The scenery had changed to quite magnificent as snow capped munros were encircling me. 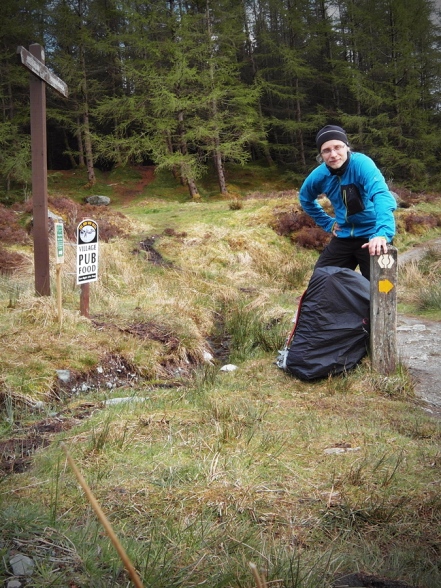 I reached the halfway point at 15:30, after walking some time on a shitty cattle track. But then the path went through some really charming forest before descending to a valley where the Archentyre farm was a welcoming sight. No other campers, hot shower and meal, let alone speaking the landscape seen through my tent door, I was feeling very much alive.

I slept well and was good to wake up without hearing raindrops. But a quick look outside showed it would be quite temporary relief. I reached Tyndrum before it really began to rain. And this didn’t feel like the showers during the previous days but a change for worse. In Bridge of Orchy I stopped for a tea, just on time to witness an old steam locomotive pushing on along the mountainsides. Impressive. Yeah, and then back to walk in the torrential rain.

I hastened my speed to reach soon Inveroran and a lovely free and wild campsite close to the hotel there. At the grassy patch I met another Finn, and nice guys Sven and Michael. During the afternoon and evening it rained and shined in turns while we were enjoying some local beers at the hotel.

A long and grey day through barren moorland, in heavy rain. Walking was easy though and I covered the kilometres quickly. I reached the lonely Kingshouse around the lunchtime, when people were still getting ready for their daily walks. Kingshouse felt a bit unwelcoming place and I didn’t linger any longer there. Up to the Devils Staircase, which wasn’t that hard at all, merely a 30-minute push. It didn’t cease raining before reaching Kinlochleven. The guys joined me there and we enjoyed the evening in the pub eating, drinking and watching Champions League. Kinlochleven was quite busy again. 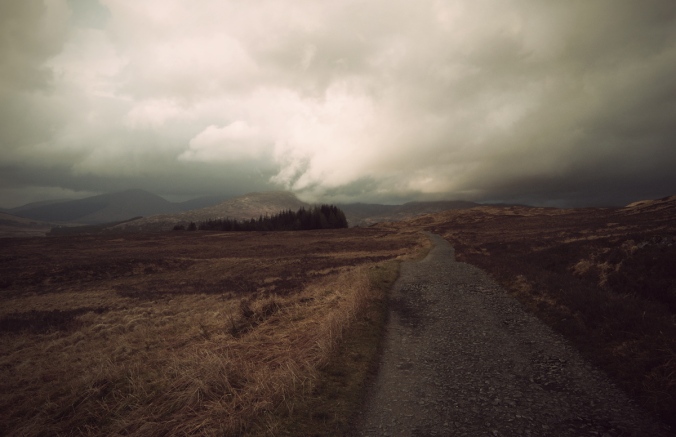 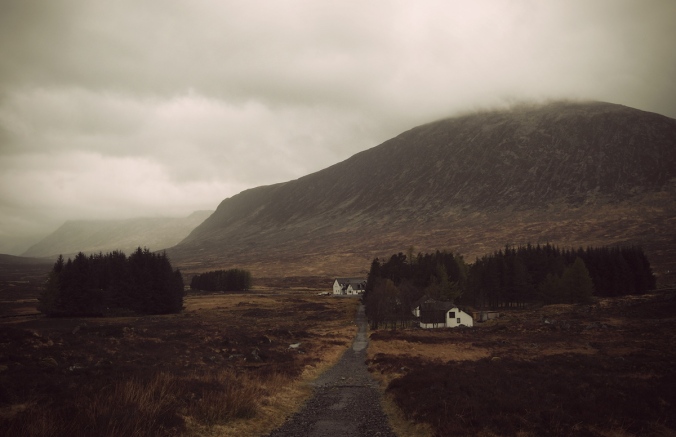 The last day but no hope for any sun. I pushed through a short hailstorm and the heaviest winds of the whole hike. No other walkers except of group of three young guys from Holland. They kept strange rhythm as one of them was running far in front and two lingered behind, and then I kept passing by all of them while they stopped for a break and changed “the runner”.

At the end of the moors the path dived deep into a spruce covered forest before reaching the edge of the Glen Nevis valley. I saw the campers far below meaning the end of WHW was there but I didn’t have yet any great feeling of victory. Most of all I wanted to pitch my tent quickly and get a warm shower. I was feeling the wind in my bones.

After recovering myself I rejoiced seeing Sven and Michael again, who were planning to climb the Ben Nevis in the following days, depending on how the weather would allow.

The next day I had to depart, walking the last 3 kilometers to Fort William, spendind the afternoon there before taking an evening train back to Glasgow. The train trip was really worth it as it went some parts close to the trail I had just walked to the opposite direction. Seeing the same landscapes again gave a good moment to look back to what I had just experienced. And it started to snow as well. A night at the Glasgow airport was doable but wouldn’t do it too often. 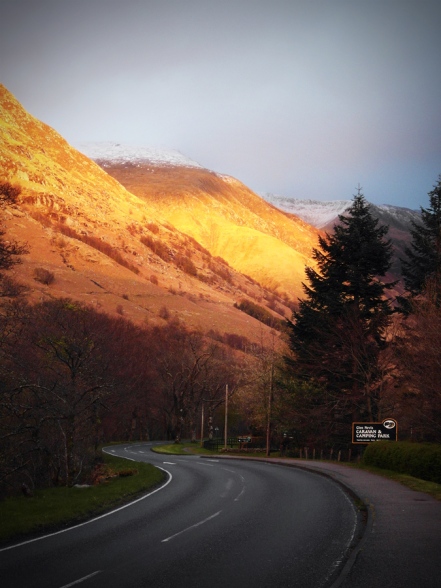 For me the highlight and purpose of this hike was to do it finally completely alone. And that experience being so great might slightly affect to my feelings about the West Highland Way itself. But I think it’s overall a really nice walk. I liked the changing landscape and unpredictable Scottish weather. And luckily in April there was no midges or other bugs. But it’s very easy walk without any real height gain or loss and the trail is well marked. So I was a bit surprised to see so many locals struggling. The Fort William train station was quite a funny sight as more or less limping walkers started to gather there for the train.

Hi people! I'm Antti Rantanen, Finnish hiker and writer of this blog. I'm currently living in southern Finland where no mountains exist so this page is, together with long distance hiking and outdoor topics, about dreaming and getting ready to tackle some! 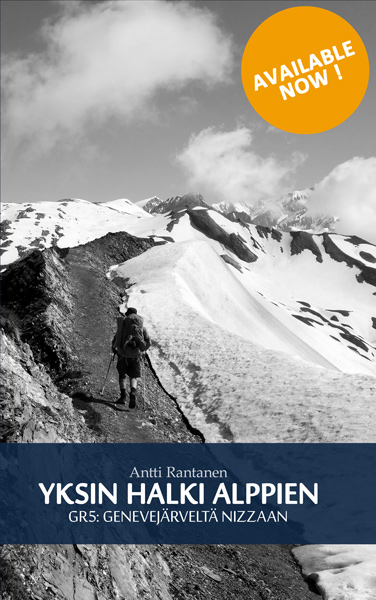