(All the photos in a slideshow here.)

My summer holiday was coming soon to its end, when my friend Mr. Overhill called and asked what if doing some hiking together. He had already Norway in his mind. Without too much time for planning or preparations, Hardangervidda National Park sounded like a suitable destination. The famous Jotunheimen felt a bit too hard perhaps, as there was less than a week time for getting everyhting ready.

HOW TO GET THERE

Even if the route seems to be near Finland and near Oslo, it took actually serious time and effort to reach it. After sleeping the night at the Helsinki airport, we boarded an early morning flight to Oslo Gardermoen airport. Not surprisingly Finnair offered just some Marli-juice for hungry hikers! From the Oslo airport we were forced to take a special flybus to the city centre. It seems the Oslo railway system was under some construction work and no train were leaving or entering the city. The direct bus took 40 minutes and 20 euros.

Well, in Oslo we had couple of hours to buy some supplies. At the very centre there’s the store of the Norwegian Trekking Association, which sold us the Hardangervidda map, again with 20 euros. We also asked about the damages of the heavy rains that had hit the area last days, but shouldn’t be any problem. Across the street one finds XXL sport store selling the camping gas. (Located where the Oslo cathedral is, at the Storgata side) We also bought mosquito repellent, which surprisingly cost almost 20 euros too! Our budget was reshaping itself dramatically!

From Oslo bus terminal we took a direct bus to Geilo (175 Hallingbussen, 13:00 – 17:25), a major crossroad. After 4,5 hour bus trip we had to wait few hours before taking another bus 991 (19:45 – 21:05) to our final destination, Fossli/Liseth crossroad at the Northern edge of the Hardangervidda national park. Right after leaving Geilo the landscape changed dramatically. We were entering the plateau of Hardangervidda. The treeless scenery reminded me quite a lot of Lapland. 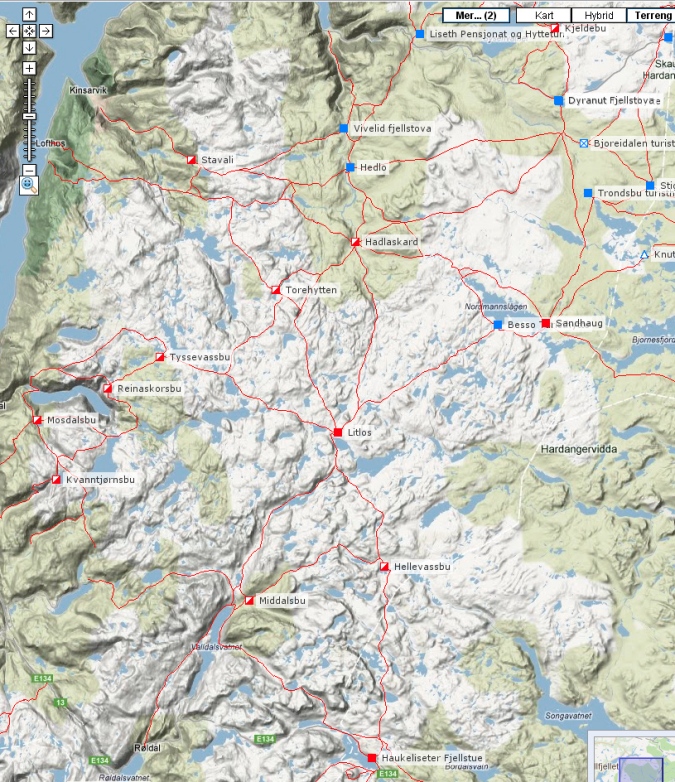 And it started to rain.

The bus driver left us quite in the middle of nowhere. On the other side of the road was a muddy trail descending deeper in to the valley. It was already quite late so our only mission was to find a campsite for the night. In light rain we began walking. Maybe after half an hour, after reaching the valley floor and climbing again a bit higher, we found an ok looking spot. Nothing fancy, just some mosses, which were not soaking wet. We pitched our tent and felt asleep, listening the rain, mosquitoes and nearby stream. 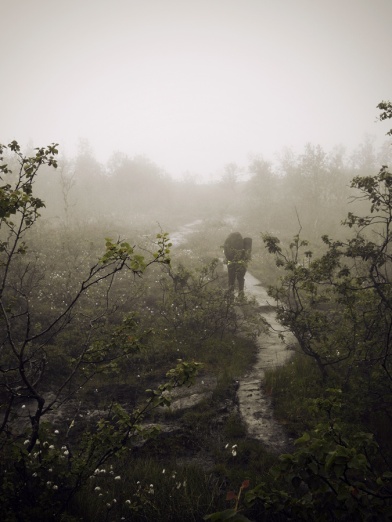 One was so tired after all the travelling, that the first night went quite in a coma. But in the morning we were very eager to start walking. At this moment we hadn’t decided yet where to walk actually. Basically there was to options depending on the weather, terrain and how the walking would feel. The first option was to through hike the park from North to South and the other was to make a turn to West after Hadlaskar hut, finishing to the fjord at Kinsarvik. The first option felt more epic and the second a bit more relaxed.

Yet wasn’t the time for decision making so we just started to set foot after another. Unfortunately everything was covered in a thick layer of mist and we didn’t see the surrounding landscapes at all. The trail was very muddy and slippery, as it had been raining a lot the previous days. We pushed trough bushes and swampy grounds light showers occasionally hitting us. But then the mist disappeared and at the Hedlo hut everything looked quite lovely.

After a short lunch break we kept going, following a wide river on the right hand side. On the higher ground couple of kilometres before Hadlaskar hut we spotted a really nice campsite, an even grassy patch in the middle of rocky landscape and next to running water. We decided to stop and started the relaxation period of the day. The wild scenery around us was quite amazing and especially the special shape of Hårteigen Mountain seen in the distant.

There was a bunch of mosquitoes at that area but those poor bastards forget to eat while inside the tent, just trying to get out. So the “night” went well without any bites. Without real darkness the night changed to a morning, revealing itself quite grey and cloudy. After 50 minutes we reached the awakening Hadlaskar hut.

We crossed the big river to the western side by crossing a steady bridge but later on there were exciting stream crossings. The trail followed the river almost the whole day, occasionally descending to the same level and then climbing again high above the gorge. We didn’t see anyone during this section of the trail.

We were almost at the Litlos hut and hadn’t seen any nice spots for camping. Mr. Overhill started to be quite dead with his blistery feet at this point of the day so we just camped at the hillside close to the Litlos hut. It was a nice spot as the busy hut was hidden on the other side of the hill. After a strenuous day it felt great to relax in the evening sun, looking the beautiful mountain scenery.

The night had been cold as my Suunto temperature meter showed 4 degrees of Celsius in the morning. It was better just to start walking. Fortunately the day turned soon really sunny and hot. We passed by the sleeping Litlos hut to the other side of the lake, and then up hill to the first pass of the day. Soon after that we saw a beautiful lake and some streams running down that we had to cross. The water was crystal clear and the slabs looked big and smooth. I decided to cross with my Crocs’ but damn the shin deep water was cold!

We reached the Hellevasbu hut around one in the afternoon in a blazing sun. Fortunately there was water to drink all over. After Hellevasbu it was just to shorten the distance to Haukeliseter and making the last day easier. After one hour and half we reached a lovely valley, which ended to a steep and snowy ascent. We halted to think if making the last push to the other side or just camp right then. Fortunately a Danish hiker was approaching from the pass so we were able to ask her about how it looked on the other side. She said that the grass would be definitely greener there. The weather would turn also rainy the next day so we thought to keep going.

The ascent was tough in the melting snow. However, it was good choice to walk to the other side as we found a really nice spot for camping. We ate well and enjoyed the last evening in the peace of the wilderness. 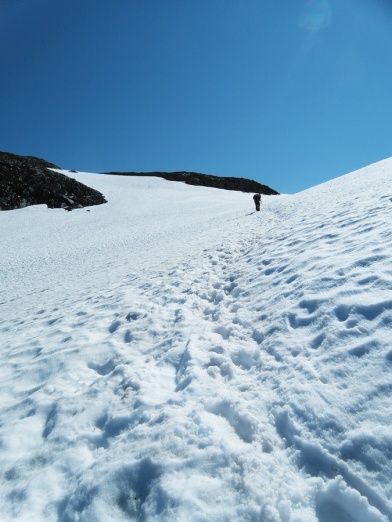 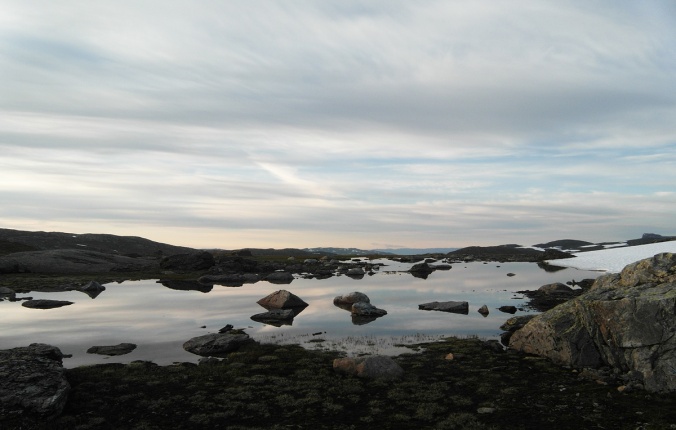 The last morning was promisingly sunny though the night had been again quite cold. We wanted to start very early, as we had to catch a bus from Haukeliseter back to Oslo. Walking felt good but it was a bit sad to leave the trail so soon. There was again no one walking that early and we had all the scenery just for ourselves. The last section of the hike was quite easy and so we reached the Haukeliseter hotel around 11. Even after a bit shorter hike, one was able to taste the victory!

At 12:35 we took an express bus back to Oslo, where we enjoyed tasty pizzas in Peppes Pizza restaurant. This time it didn’t cost 20 euros but even more, pizza and a beer over 30 euros together! It was better to move to the airport right away to wait for our flight and not to buy anything anymore.

Hiking in the Hardangervidda national park offered something different than I had been lately used to. No campsites with facilities and nearby villages, no masses of other hikers, just wild nature as far as one can see and freedom to pitch your tent anywhere. I really enjoyed that though everything was easy as the weather turned out to be more than perfect. All my gear worked well and walking felt easy without any real pain. A perfect way to finish my summer holiday!

Hi people! I'm Antti Rantanen, Finnish hiker and writer of this blog. I'm currently living in southern Finland where no mountains exist so this page is, together with long distance hiking and outdoor topics, about dreaming and getting ready to tackle some! 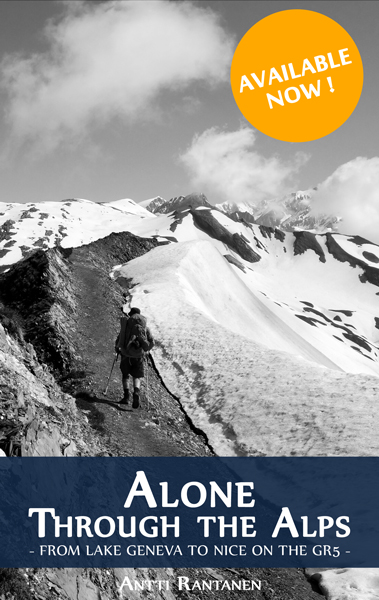